Masha, an exploited bear who spent 19 years in a circus, has finally found freedom! Thanks to your support, she is now in Romania after being rescued from war-torn Ukraine.

“It has been a tense wait to learn the outcome of her journey, and we are just so relieved that this rescue has been a success and wasn’t prevented by war. After so many agonising years of cruelty, Masha can finally get to live in peace, as she deserves.”

Masha, a Eurasian brown bear, was taken on a 140-mile journey across war-torn Ukraine to the Romanian border by the brave Ukrainian animal charity, Warriors of Wildlife. There, they were met by Millions of Friends (AMP), who joined them in transporting the 22-year-old bear to their Libearty Bear Sanctuary. This all happened successfully despite the dangers posed by Russia’s invasion.

Masha spent most of her life in misery as part of a circus, where she was kept in a tiny cage, and forced to perform tricks, such as riding a bike to loud music and roaring crowds. The elderly bear was finally surrendered by the circus owner to Warriors of Wildlife and placed in a temporary shelter. Now, she will live in a beautiful forest home filled with trees to climb, pools to bathe in and soon she will meet other bears to socialise with. Thanks to you!

Due to her upbringing in captivity, being released into the wild is sadly not possible. But she has found a safe haven for bears.

Our partner, Libearty Sanctuary is based in the oak forests of Zarnesti, Romania, and provides rescued bears with a safe place to live naturally. AMP has overseen all construction work, manages the sanctuary, cares for the bears and facilitates bear rescues.

You can also try to spot Masha and some of the other 115 rescued bears on the sanctuary’s YouTube livestream.

“The situation unfolding in Ukraine is terrifying for people, but also animals who are often the forgotten victims in times of crisis yet suffer immensely. While things are truly bleak, I am delighted that even amidst the devastation, there is hope for Masha and we hope other animals too in the coming weeks.

“It has been a tense wait to learn the outcome of her journey, and we are just so relieved that this rescue has been a success and wasn’t prevented by war. After so many agonising years of cruelty, Masha can finally get to live in peace, as she deserves.”

“It was extremely sad to see Masha in the circus where she had to perform for 19 long years. When we eventually got her into our care, her ex-owner still tried to proudly show us the tricks he taught her, a steel bar under his arm. Masha immediately started to cower and stand on her hind leg like a human and use her paws to protect her head and face - she was terrified.

“When war broke out and her transport was cancelled, I had to leave the country and felt utterly guilty to leave her behind although I knew it was just temporary, I was coming back. Seeing her being released at the Libearty bear sanctuary was just a great moment of joy. She was able to do everything on her own time; she wasn’t forced to do anything. It is now time for her to just be a bear, digging the dirt, climbing trees and enjoy her time.”

Keeping captive wild animals in cruel exploitative systems has a devastating impact on individual animals and wildlife. When we make wild animals dependent on humans, they are especially vulnerable in emergencies, including human-made conflicts and catastrophes.

We believe that wild animals have the right to a wild life. They don’t belong to us - their value is not based on what they can do for people or the profit we can extract from them. We need to protect them, not exploit them. 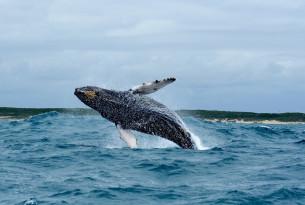 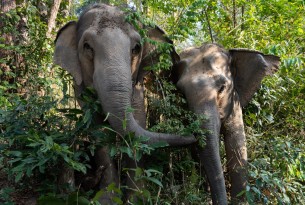 Do you want to hike through mountains of northern Thailand and help elephants?