Europe’s top ten financial institutions are investing in companies at high risk of being linked to deforestation in the Amazon and Cerrado.

"Wild and farmed animals are sentient beings that deserve respect, and banks must be held accountable for their actions."

Banks such as Rabobank in the Netherlands, and Standard Chartered in the UK, are bankrolling companies linked to cattle and soya supply chains in high deforestation regions, for cattle and soya production that feeds factory farmed animals in Europe and around the world.

The report suggests that up to $98 billion USD has been invested since 2015, meaning consumers are unknowingly fueling these unethical and carbon-intensive business practices with their savings and pensions.

Alarmingly, these financial institutions may be linked to the clearance of irreplaceable rainforest, which in some cases is even illegal and unregulated. The Amazon, while being a major producer of the world’s oxygen, is also home to millions of species of sentient animals that suffer when their habitat is lost.

Soya is planted in huge swathes in destroyed habitats before being exported to feed factory farmed animals around the world, completing the cycle of cruelty.

Right now, more than 70 billion animals are farmed for food each year – two-thirds on factory farms in conditions that mean they can’t move freely or live naturally.

These animals are treated as mere commodities without even the most basic of needs met.

People are suffering too

While this is a major animal welfare and conservation concern, many of the cattle and soya farmers are exploited too – worked hard, paid poorly, granted minimal rights – making this a human rights issue too.

“Banks should throw their support behind humane and sustainable food systems, not factory farms dependent on destructive animal feed imports. Wild and farmed animals are sentient beings that deserve respect, and banks must be held accountable for their actions.”

We are calling on financial institutions to right this wrong, ensuring they have policies and systems in place such as:

From rumbles and chirps to whines and whistles, animals can produce dozens of different sounds for different purposes. 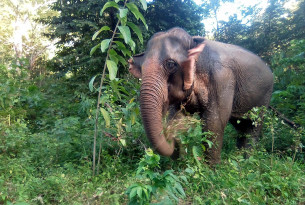 The team at Following Giants just welcomed Thongsuk to the herd, and older female Jahn was overjoyed to make a new friend after recently losing her bestie Sow.